Skip to content
Previous Next
Behind The Music: Happy Xmas (War Is Over)

behind the music: happy xmas (war is over)

John: ‘Happy Xmas (War Is Over)’ we wrote together. Nothing more to say on that. It says it: ‘War is over if you want it.’ Because it was still that same message, the idea that somebody is either going to give us power or [has] taken our power or has made us go to war or not made you go to war or the president did this to us. We are just as responsible as the man who presses the button. 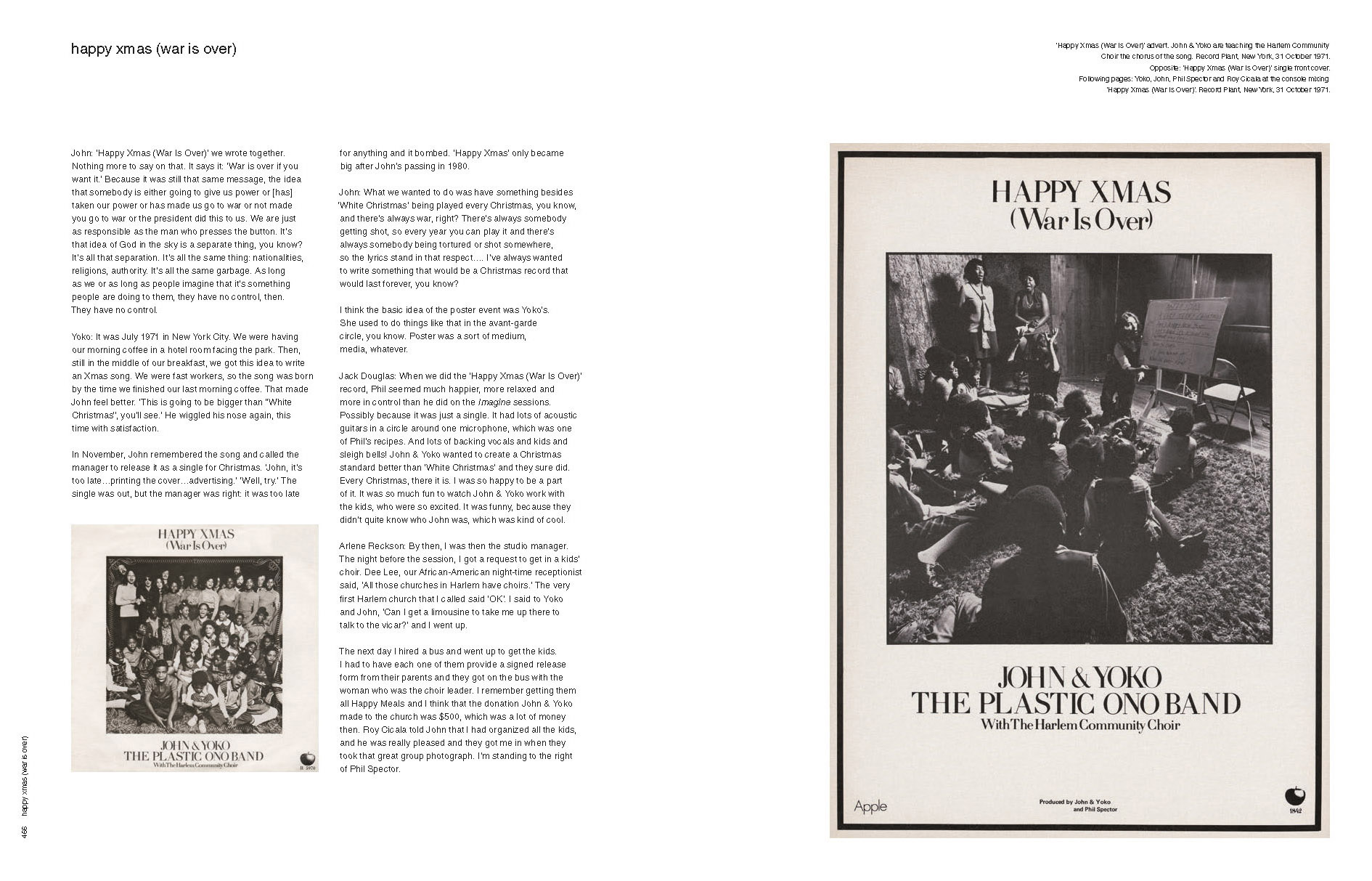 ‘Happy Xmas (War Is Over)’ advert. John & Yoko are teaching the Harlem Community
Choir the chorus of the song. Record Plant, New York, 31 October 1971.
‘Happy Xmas (War Is Over)’ single front cover.
From the book Imagine John Yoko – Collector’s Edition
Yoko: It was July 1971 in New York City. We were having our morning coffee in a hotel room facing the park. Then, still in the middle of our breakfast, we got this idea to write an Xmas song. We were fast workers, so the song was born by the time we finished our last morning coffee. That made John feel better. ‘This is going to be bigger than “White Christmas”, you’ll see.’ He wiggled his nose again, this time with satisfaction.

In November, John remembered the song and called the manager to release it as a single for Christmas. ‘John, it’s too late…printing the cover…advertising.’ ‘Well, try.’ The single was out, but the manager was right: it was too late for anything and it bombed. ‘Happy Xmas’ only became big after John’s passing in 1980.

‘Happy Xmas (War Is Over)’ single in coloured vinyl with ‘morphing heads’ photographed by Iain MacMillan.
From the book Imagine John Yoko – Collector’s Edition
John: What we wanted to do was have something besides ‘White Christmas’ being played every Christmas, you know, and there’s always war, right? There’s always somebody getting shot, so every year you can play it and there’s always somebody being tortured or shot somewhere, so the lyrics stand in that respect…. I’ve always wanted to write something that would be a Christmas record that would last forever, you know? I think the basic idea of the poster event was Yoko’s. She used to do things like that in the avant-garde circle, you know.

John & Yoko duet in a stripped-back acoustic singalong mix of the master take, this time without the orchestra, choir and other Phil Spector production flourishes.
From Imagine – The Ultimate Collection

Yoko, John, Phil Spector and Roy Cicala at the console mixing
‘Happy Xmas (War Is Over)’. Record Plant, New York, 31 October 1971.
From the book Imagine John Yoko – Collector’s Edition
Jack Douglas: When we did the ‘Happy Xmas (War Is Over)’ record, Phil seemed much happier, more relaxed and more in control than he did on the Imagine sessions. Possibly because it was just a single. It had lots of acoustic guitars in a circle around one microphone, which was one of Phil’s recipes. And lots of backing vocals and kids and sleigh bells! John & Yoko wanted to create a Christmas standard better than ‘White Christmas’ and they sure did. Every Christmas, there it is. I was so happy to be a part of it. It was so much fun to watch John & Yoko work with the kids, who were so excited. It was funny, because they didn’t quite know who John was, which was kind of cool.

Iain Macmillan’s contact sheets from the recording day
with Harlem Community Choir. Also involved in the recording
with John & Yoko were Allan Steckler, Arlene Reckson,
Bob Fries, Chris Osborne, Hugh McCracken, Jack Douglas,
Jim Keltner, Klaus Voormann, May Pang, Nicky Hopkins, Peter Bendrey,
Phil Spector, Richard Williams, Roy Cicala, Stuart Scharf and
Teddy Irwin. Record Plant, New York, 31 October 1971.
From the book Imagine John Yoko – Collector’s Edition
Arlene Reckson: By then, I was then the studio manager. The night before the session, I got a request to get in a kids’ choir. Dee Lee, our African-American night-time receptionist said, ‘All those churches in Harlem have choirs.’ The very first Harlem church that I called said ‘OK’. I said to Yoko and John, ‘Can I get a limousine to take me up there to talk to the vicar?’ and I went up.

The next day I hired a bus and went up to get the kids. I had to have each one of them provide a signed release form from their parents and they got on the bus with the woman who was the choir leader. I remember getting them all Happy Meals and I think that the donation John & Yoko made to the church was $500, which was a lot of money then. Roy Cicala told John that I had organized all the kids, and he was really pleased and they got me in when they took that great group photograph. I’m standing to the right of Phil Spector.